The Systems of Chrono Trigger 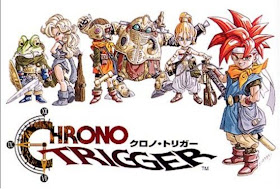 This article is a companion piece to the Gamification and Law series. It’s meant to give a very specific example of one way a video game can communicate the idea of system to a person.

Chrono Trigger is unique among JRPGs because of its focus on place instead of story. Incorporating time travel into the game puts certain limitations on the narrative while also opening up unique storytelling opportunities. What makes the game so special is that when you start focusing on place instead of linear narrative in a game you begin to talk about the interconnected relationship between things. The why and how of events in the game is the central focus of the story, which are the very questions that drive our own relationship with systems.

Chrono Trigger’s cast, while charming in a Dragonball Z sort of way, are static with the exception of Magus. Chrono is your basic silent protagonist while Marle stays in love with him and generally happy throughout. Frog is always the dutiful soldier, Lucca loves science, Ayla talks like Yoda, etc. This is not to say the characters do not have backstories or that they are bad characters, but compared to FF3 there is a notable lack of change in their dispositions. They overcome obstacles, usually in their past, but it does not change their outlook on the future.

The reason for this is because if your game is about time travel and you allow people to muddle in the past then you have to figure out a way to keep characters consistent. You can write tons of dialog to cover all the different scenarios. Or, more realistically, you can just keep everyone as one-note as possible. Lucca can go back in time and save her mother from the accident, but either way she resolves to dedicate her life to science. Frog can put Cyrus’s spirit to rest but it only increases his resolve, it does not particularly change him personally. This is important to note because it demonstrates that the characters are not affected by the world around them. They are beyond it.

The game is about slowly piecing together the timeline of Chrono Trigger’s world and figuring out what happened. After a brief introductory adventure, we travel to 2300 AD and discover the inevitable Armageddon of 1999 because of Lavos. Then we deduce it must have been Magus in the year 600, only to discover Lavos actually arrived millions of years ago when dinosaurs still roamed the planet. The arrival of Lavos brings about an Ice Age and ultimately causes the distortions in time that allow the protagonists to succeed in the end. 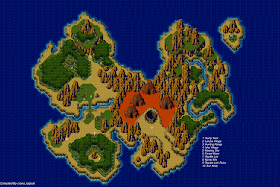 This is a systems narrative. The game is about observing the various stages of a system, putting together the causes and effects, becoming empowered by that knowledge and then moving to correct the problem. In systems thinking the individual never totally understands what’s going on because of the limitations in feedback. Sometimes it can take years or decades for the consequences of your actions to play out. By then it is too late to change anything. The same is true for the issues one is currently facing: the causes have already happened and the relationship between the event and the feedback is not always clear. Uncertainty is always present for those working with systems in real life. Chrono Trigger, as a story about time travel, is about the unique chance to understand a system as it spans over thousands of years.

These ideas are outlined in Donella H. Meadows’ excellent book Thinking in Systems. Meadows defines a system as, “an interconnected set of elements that is coherently organized in a way that achieves something.” She explains that everything we think we know about the world is actually a model of it. There’s no way for a person to fully understand the past because they aren’t there and they can’t know the future for the same reason. So we build a mental model based on our observations and use it the best we can to make decisions. She calls this ‘bounded rationality’ or the fact that people don’t always have perfect information when they are making choices.

Almost all video games are composed of systems that ultimately make a kind of limited model of reality. Ian Bogost referred to this as the simulation gap, but technically in systems thinking there’s never really such a thing that doesn’t have a gap. It’s impossible to know all the data to create a 100% accurate model and you just accept it. The difference between a game and a system in real life is that it is a closed system. It’s conceivably possible to fully comprehend a closed system because you can observe all of its connections. Or at least the outer edges of those connections, they can rapidly generate so much complexity that it’s too much for the human mind to follow. Game designers who would assert otherwise are either delusional or making extremely linear games.

So how do you study a system when you acknowledge right from the start that you can’t know everything about it? What you’re looking for are levers and places where your input can affect other parts of the system. How long should you wait before deciding how much inventory you’ll need for the next month in your shop? How much money can you spend on that new car, even though anything could happen to it later on? Should you get dental insurance, even though the premium will cost more than just out of pocket expenses most of the time? These issues are not systems themselves but rather the questions they generate, which in turn can become the story of one’s own life. What should I do with my life to accomplish my goals?

Chrono Trigger is the story of a closed system and a group of heroes who study its various levers and bring about change. While most games can easily tell a story about cause and effect Chrono Trigger is more concerned with those specific relationships rather than discussing consequences. The entire game is about fighting destiny. Lavos, as a being that can control time, has crafted a timeline that always ends with its victory and the destruction of the planet. On the Black Omen the player discovers it is even repairing the timeline with clones of the protagonists to replace them to ensure continuity. Before the last battle each character opines that Lavos has been controlling their entire species, guiding their evolution with its own DNA to maintain power. Such perceptions echo the ones you encounter when studying similarly large and frightening systems, a sense of powerlessness as larger forces control and bind your future.

This complex relationship between actions, consequences and trying to control them is depicted throughout the game. The trial sequence involves several possible acts the player can take and their interpretation as to Chrono’s guilt, no matter what the player intended. Even if you play through the sequence perfectly Chrono still goes to jail because of the Chancellor’s corruption. The newgame plus option is all about encouraging the player to explore and see what happens when you do things differently.

This idea of systems is probably best represented in the Fiona’s Forest mission where you transform a desert into a forest. First you have to realize the desert is not just there, it was caused by something 400 years ago. Then you have to undo that cause. Afterwards Robo volunteers to help plant a forest and revitalize the area. Feedback is observed in the form of a desert, a lever is detected, pressure is applied, then corrective action is taken. All of this is uniquely possible because of the time travel mechanic and the fact that you, the player, are observing the system as a whole. Compare that to your original perspective of the desert when you walk through it in the year 1000. It’s just there. Nothing you can do will change its status as a desert because it’s too late. Only by travelling in time do you become aware of the underlying feedback and lever, the relationship, which created the desert. 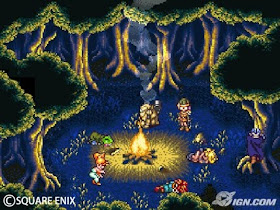 Narratively the game involves one of the inherent flaws that systems thinking notes about understanding the system: you can never fully control a system because it becomes static when you do. Lavos is a being that tried to be in total control of the world, its reach going so far as to even predict and attempt to counter the heroes seeking to destroy it. Yet once that happens the static nature allows a person to step outside of the system and change it. Or put another way despite how much Lavos was overwhelmingly in control of the timeline in the game, it still didn’t have the power to stop its own death.

It’s not my goal to claim the creators of the game were thinking about systems theory when they made Chrono Trigger, rather to point out that time travel games are invariably about systems. You could cite Majora’s Mask or Day of the Tentacle and build a similar argument easily. It’s another example of the point I made in the Gamification and Law series about how games are uniquely suited for communicating the concept of systems and form to people. Since you can’t really start by trying to communicate something concrete to the person, games are handy because you can get them to picture how a series of relationships can be used to craft anything, be it a JRPG or a dynamic legal system. Like the desert puzzle in the game, I’m not really talking about the desert but rather a series of relationships that culminated in the desert.

As Robo considers his reflections after 400 years of turning a desert into a forest, he argues that something much larger than any of the heroes is involved in the time gates. That something wants them to see these various moments. When pressed on the issue he concludes that it is simply, “something beyond our comprehension.” That truth, more than any other, is the first step towards understanding systems, design and form.
Kirk Battle at 3:14 AM